Mountains cover the majority of land in Japan, and forests spread across 70% of the country’s land. Much of Japan’s society, culture, and traditions are rooted in the mountains and forest.

Indeed in 2016, the national holiday, “Mountain Day” was established for these reasons. On the other hand, Japan is also a marine nation surrounded by the ocean. These natural features are reflected in the widespread research and education conducted throughout Japan in Forest Science and Marine Science.

Although the mountain areas are often the subject of research and education in individual research labs at universities and research organizations, an adequate system of research and education for the comprehensive exploration of mountains does not currently exist. For this reason, at the University of Tsukuba our aim is to establish a study of Mountain Science that spans science, agriculture, and engineering.

What is a Mountain?

What are mountains exactly?
Somewhere significantly higher than its surroundings, somewhere with a high elevation, somewhere with a substantial slope.
There are many definitions. According to these definitions, 20 – 30% of the world’s land surface is mountains, and it is said that 10 – 20% of the world’s population lives in the mountains. There is an even larger population downstream from mountains, and the people who live here are affected by both the gifts and the disasters that the mountain brings.
Hearing the word “mountain” may only evoke thoughts of lofty and steep mountains, but at the Mountain Science Center at the University of Tsukuba, we think of the mountains intimately intertwined with our lifestyles in a broad sense, including what people familiarly consider mountains as well as everything from the mountain’s summit to its foothtills, satoyama, which is the area between the foothills and arable flatland, and forests.

What is Mountain Science

Mountains are formed in the earth’s foundation (geosphere), and there are a wealth of creatures living there (biosphere) that are intricately involved in people’s lives (anthroposphere).
It is said that half the world’s people are reliant on mountain resources. In the mountainous country of Japan, the proportion of people who depend on the mountains is even higher.

Looking across the mountain from its summit to its foothills, we can find water and other resources flowing here, and there are dramatic changes in its environment, including the temperature.
Thinking of mountains as this kind of system and exploring its connection to the geosphere, biosphere, and anthroposphere, will give us a proper understanding of mountains and how to maintain them appropriately. This will also lead to utilizing the mountains’ gifts and avoiding its disasters.
We are aiming to establish Mountain Science as the academic field exploring mountains in this comprehensive manner.

In mountainous areas, a number of issues arise:  a decrease in biodiversity, disasters (from heavy rain- and snowfalls, and sediment movement), forestry stagnation, aging populations and depopulation of mountain villages, decline of upland communities, and damage from animals. These issues are all complicatedly intertwined. Resolving them is also a task for Mountain Science.
In the mountain-rich country of Japan, these issues stand out acutely.
Finding the remedy for these urgent issues will lead to resolving the world’s mountain issues as well.

The Establishment of Mountain Science

We will establish the field of Mountain Science to comprehensively explore mountains from the perspective of the geosphere, biosphere, and anthroposphere across the fields of science, agriculture, and engineering. 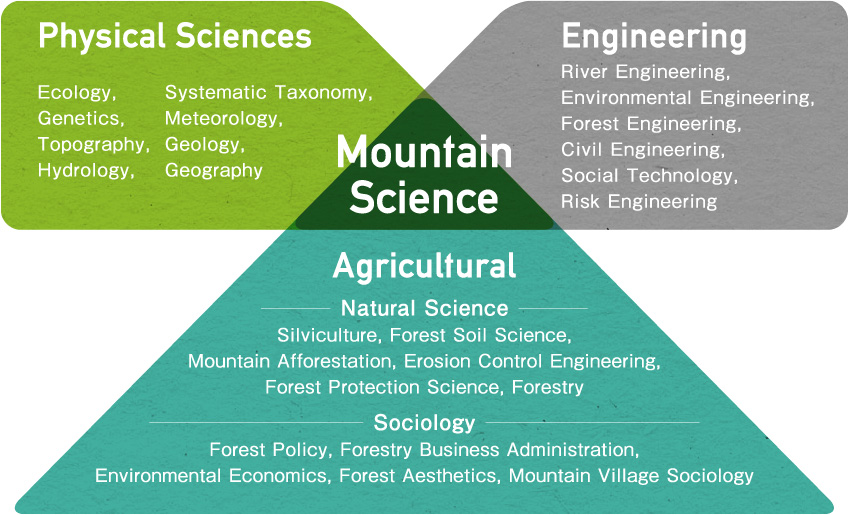 What is the Mountain Science Center (MSC)

The MSC was founded in April 2017, by combining Sugadaira Montane Research Center (since 1934) and the forest section of Agricultural and Forestry Research Center, consisting of Ikawa forest (since 1962), Yatsugatake forest (since 1949), and Tsukuba Experimental Forest (since 1973). Thirty-seven faculty members (as of March 2018) spanning the fields of biology, agriculture, earth science, and environmental science teach here. Many faculty members from Tsukuba Campus of the University of Tsukuba also concurrently teach here.

The purposes of MSC 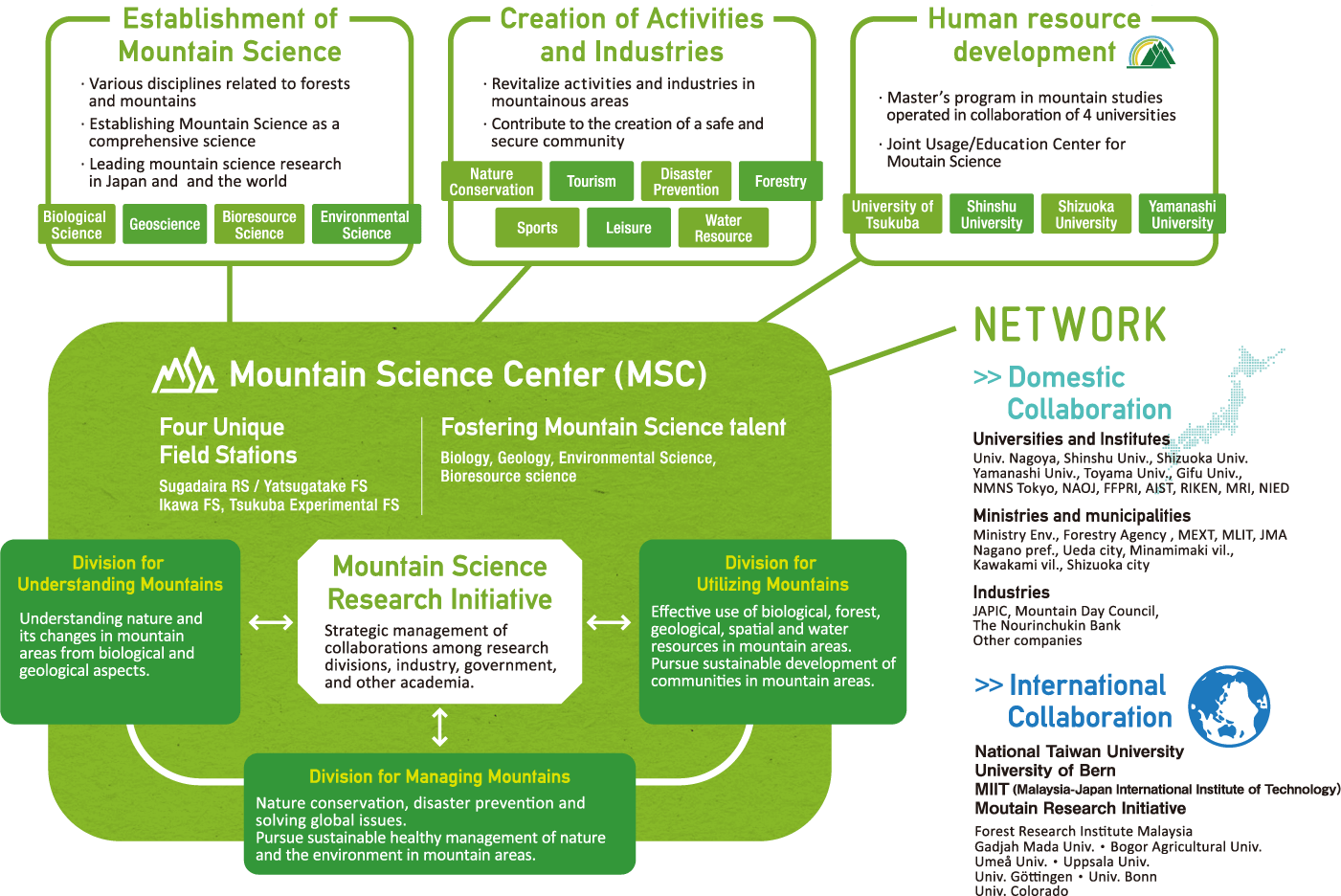